Christmas with the twins was amazing.  I loved watching them light up after seeing their Christmas gifts. I sat for an hour Christmas morning watching them ride in circles on their new Power Wheel ATV’s.  They were so happy!  But, these little ones really are just always very happy little boys.  They are well adjusted and joyful children.  I love being their foster mama.  They are a joy! 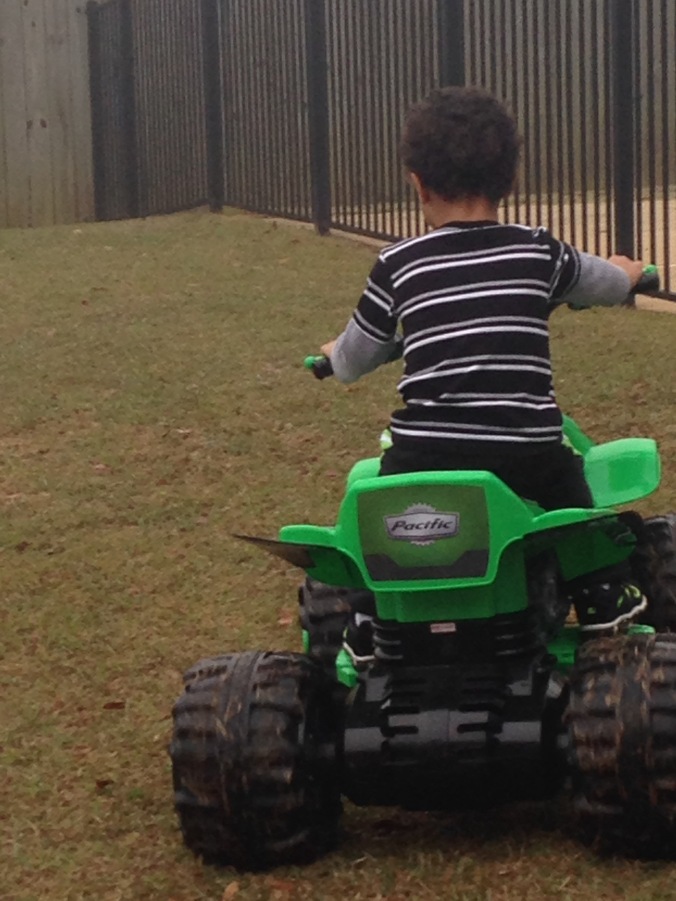 The twins are amazing!  God has protected their little hearts for sure!  They are loving, kind, sensitive, playful, compassionate children. They play well with Baby Girl.  They attend school, church, and outings with our family and have absolutely no behavior problems when out in public.  They are pretty much the most precious little boys on the planet as far as I am concerned.

I love them already! It is crazy how fast the love comes in foster care.  But, I love them and they already have a piece of my heart!

The day I went to pick up The Twins was so cold and rainy.  The weather was just bad that day.  Baby Girl and I loaded up in the truck, put the address I was given into the GPS and headed out.  First, we went to their previous foster home to pick up their belongings and then we followed their social worker to the daycare they had attended since entering foster care just one month prior.  The social worker unloaded the carseats, handed them to me and went inside to get The Twins.  I loaded the much too large and completely inappropriate (for three year olds) booster seats into my truck.  I didn’t say anything to the social worker about the seats because I was just meeting this woman.  If she was the one who bought the boys these seats, I didn’t want to offend her by saying they weren’t correct, so I just stayed silent.  She came out of the daycare with two of the most precious little boys that I have ever seen.  Identical twins, K and J walked outside in the cold with their little matching jackets on and I bent down to meet them.  “Hi, I’m Miss B,” I said.  “Oh, they’re going to call you mama,” the social worker interrupted.  “They call all women ‘mama’ and all men ‘daddy.”  “They can call me whatever they want,” I replied.  In my mind, I knew this wasn’t a good sign.  It isn’t normal for a child to use those words for anyone, but their immediate and most special caregiver.  T never called me, “mama” and he was with me for seven months.  The twins are younger than T, but still I knew this couldn’t be a good sign of attachment to their parents.  I picked the boys up one at a time and put them into their car seats.  The social worker told me she would be in touch with me later in the week and she drove away.

After everyone was all buckled, I got into the driver’s seat and looked in my rear view mirror.  Three three-year olds looked back at me.  Baby Girl, K and J were all buckled and ready to go.  Was I?  Could I do this?  Three children under three years old is a lot… but yes I knew I could!  God had given me this blessing and we were going to be fine.  I turned around and said, “Everyone ready to go home?”  K looked at me with a HUGE smile on his face and said to me clear as day, “We’re your babies now Mama!”  My heart both sank and broke at the same time.  They just met me.  They haven’t been in my car for two minutes and they’re already calling me, “mama.”

I’ve been praying for years… years I’ve been praying.  My heart is for the children that I believe God will bring into our lives to minister to through foster care and so when we got military orders to move, my heart broke.  It broke because we are foster parents and for years we have fostered precious little souls that each have a piece of my heart.  Little Man, Baby Girl, Sad Eyes, T, and The Baby all have a piece of me.  Baby Girl’s adoption last year was one of the greatest days of my life!  Being her forever mommy is one of my happiest joys!  My heart still feels there are little loves that need a mommy to take care of them and that I am that mommy.  So, when we got orders I was devastated.  We are not scheduled to move until next June, but still I called our agency to let them know the military’s plans to move our family.  All parties agreed that we should put our home on hold except for respite.  I grieved.  I grieved not being able to do what I truly believe God has called me to do.  But, I started packing away my baby things, my foster care items went into labeled boxes to be put into storage.

Then, tonight at 8:30 pm we got “THE CALL!”  Everyone in the foster care community knows this call.  It starts with looking down at your caller ID and seeing your social worker’s phone number.  Your heart starts to beat fast.  You get really excited!  Tonight was no different.  Two little boys need us, twin three year old boys.  We should get to welcome them into our home this Monday if all goes as planned.  We will have them for a short time, probably two months.  Their mother is working her case plan and is seeming to be doing really well, so this should be a short placement, but we are still very excited.  I can’t wait to meet the two little boys who will be part of our family for a short time.  I can’t wait til Monday!